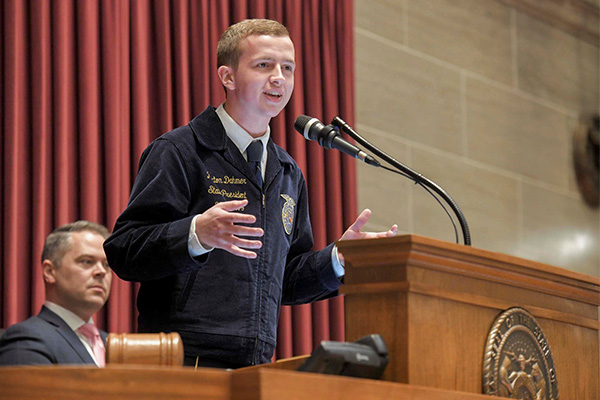 Sixth-generation agriculturalist and third-generation FFA member Paxton Dahmer never saw himself as a National FFA Officer, but after being elected Central Region Vice President at the 93rd National FFA Convention last month, he hopes to reach more students in a unique way.

“Right now, we have a pretty unique opportunity with virtual interaction to reach additional students that we wouldn’t traditionally reach,” Dahmer says. “Whether that’s Zooming into a classroom or meeting a student face-to-face, we have the opportunity to dedicate a lot of time to doing just that. My hope is to engage with youth in as many ways as possible and try to develop them as FFA members so that ultimately we’re strengthening our industry along the way.”

Growing up, Dahmer was a member of the Nevada FFA Chapter. He raised commercial cattle and showed pigs and sheep across the nation with his family. “I’m pretty proud every time I zip up the jacket to know that I’ve got a lot of FFA history behind me,” he says.

Dahmer recognizes the traditions of agriculture in 1928 when FFA was founded, but he says the organization has evolved to embrace different facets of the industry. “Now, we’re embracing different types of agriculture, and we’re trying to get as many people involved as we can because we have less than two percent of our population in an industry that feeds 100% of our population.

Interacting with former National FFA Officer Shea Booster was instrumental in helping Dahmer decide to run for the coveted position. “Shea was so good at representing FFA both inside and outside the blue jacket, and I think that’s something that’s very important,” Dahmer says. “It made me realize, ‘Hey, I can be a national officer,’ but also ‘I want to be a national officer, and ‘I want that extra year in the blue-jacket to do just that.’”

Participating in Missouri FFA’s HYMAX (Helping Youth Maximize their Agricultural eXperience) Academy sparked Dahmer’s passion for FFA and gave him the opportunity, “to see beyond the lights and sirens of state convention and see what FFA was all about,” he says.

But, that was only the beginning of leadership opportunities that provided the framework for Dahmer’s run for national FFA office.

“Going to the Washington Leadership Conference was something that was life-changing for me,” he says. “It broke me out of my shell. I was put in a community group with people that I had never met before and it gave me the opportunity to branch out of what I had traditionally known and make connections with people from Texas to North Dakota to California and New York all in one week.”

To fulfill his duties as National FFA central region vice president, Dahmer will take a year off from college at the University of Missouri-Columbia where he is a junior studying agricultural education, leadership, and communications. In January, Dahmer will move to Indianapolis where he will convene with the other five national officers. The group will spend time doing member and sponsor engagement activities. Additionally, they will provide keynote addresses and conduct workshops for FFA members and supporters across the country.

“If there’s a member out there in Missouri that wants to run for national office and doesn’t think it’s attainable, don’t close the door for yourself,” Dahmer says. “If we miss out on one opportunity we start closing doors in our mind.”