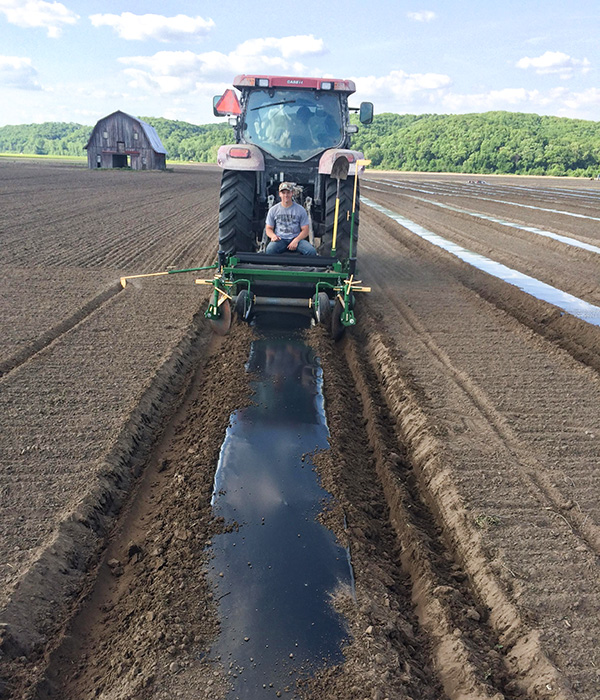 And for Ashland FFA member Ethan Hilgedick, that diversity provided the perfect opportunity for him to build an award-winning supervised agricultural experience project (SAE). Hilgedick is a national finalist in the fruit production proficiency award area for his watermelon production SAE. The winner will be announced as part of the virtual National FFA Convention, Oct. 27-29.

Farming the Missouri River bottoms in Hartsburg, Hilgedick leases land from Riverside Farms. The young entrepreneur is following in the footsteps of his father and uncle and has gleaned much advice from his predecessors on how to grow a successful crop.

“In the spring of 2017, I built a grow-room in the basement of my grandfather’s farmhouse to manage the temperature, water and the amount of light for my seedlings,” Hilgedick says.

Each spring, Hilgedick germinates more than 5,000 seeded and seedless watermelons in the grow room. At planting time, an attachment on the back of a tractor helps Hilgedick get the seedlings in the ground. Come harvest, though, it’s all hands on deck. A crew of hired FFA members assists in bringing the fruit in from the field.

“At the farm, I package the watermelons on pallets and deliver them to stores,” Hilgedick says. “In the spring of 2018, I increased the number of acres of watermelon. My additional supply was sold by expanding my marketing efforts to grocery stores such as Moser’s, HyVee, Schulte’s and Lucky’s Supermarkets. Expanding my marketing increased my operation’s profits.”

Hilgedick says his business has given him management experience. “Being an owner and operator of a business was always an interest of mine,” he says. “As a young crop producer and entrepreneur, I have learned that it is critical to pay attention to every aspect of producing the product.”

For Hilgedick, success can be found in the details. From walking the fields to checking for insect damage, sampling the soil for moisture content, checking the product for ripeness or observing pallets for broken boards, it all matters to his bottom line.

“Developing high standards early-on in my business has helped my product gain popularity among produce managers and customers,” Hilgedick says. “Paying attention to every detail has allowed me to gain numerous experiences and run a successful business.”