Look at Her Bloom 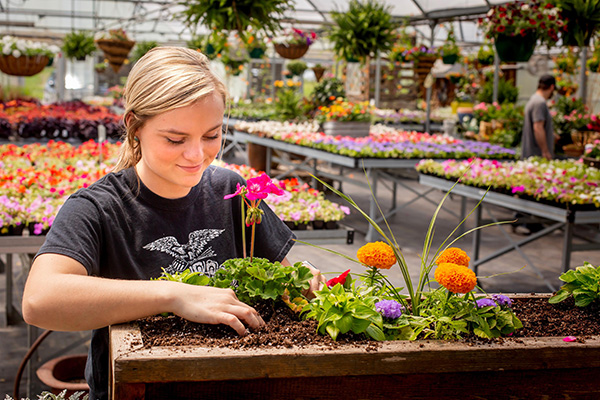 Six years ago, Kylynn Mallen’s mom made a career move, trading her job managing a local title company to owning a retail greenhouse. It was a move that planted the seeds for what would become Kylynn’s supervised agricultural experience project through FFA.

Before she entered high school, the Kylynn learned the tricks of the trade so that when she was old enough to join the Cameron FFA chapter as a freshman, she had a project that was ready to bloom.

“I lease 50% of the house space of my parent’s retail greenhouse operation and help manage the entire house year-round,” Kylynn explains.

Marketing her plants to landscape professionals as well as local do-it-your-selfers keeps Kylynn busy. In fact, the entrepreneur purchased, grew and sold 7,740 bedding and nursery plants in the spring and summer of 2018. A non-cash exchange of labor serves as a way for her to pay for some of the expenses associated with her percentage of the greenhouse and helps her mom with needed labor.

As one of four finalists in the nursery operations proficiency award program through FFA, Kylynn will be recognized on stage during the National FFA Convention next month in Indianapolis.

Change initially brought Kylynn to her SAE, and that only continues to evolve as her project grows.

“Greater responsibilities have come with increasing my ownership from 10% to 15% to 50%,” she explains. “With owning a larger percentage of the greenhouse each year, not only has the expenses and income increased, but so has the amount of work and number of hours I put in.”

Success in Kylynn’s SAE is driven by having the ability to reach a larger market share. Growing 1,100 cuttings and plugs for her plant broker was an accomplishment for the FFA member. Her handiwork was planted at the Pleasant Valley Golf Course in Iowa City, Iowa. The successfully grown varieties of lantana and impatiens are also being showcased in the plant catalog for McHuntchinson and Dummen Horticultural companies.

Mother Nature dominates as challenges for the young entrepreneur. With the greenhouse accounting for a portion of her family’s livelihood in addition to her own SAE, both are simultaneously affected by weather events which can make it difficult to make a profit.

“For instance, when my town of Cameron had a water shortage in the summer of 2018, residents were advised to not water their flowers,” Kylynn explains. “I knew my sales were going to be affected. However, after it was all said and done, early season sales over-compensated the money lost during the rest of the season, allowing for the return of a profitable amount of money.”

At the end of the day, Kylynn says she’s learned to take her SAE in stride, realizing that even though her plants are raised in a controlled environment, she also relies on the outside environment to help her project grow and provide income.

Because of her hands-on experiences in nursery operations, Kylynn says she’s gained a greater understanding of plants, including their identities and diseases.

“Being able to own such a large part of a business as a young adult has taught me many life skills,” she explains. “I learned how hard one has to work to earn an income and understand the true value of a dollar.”