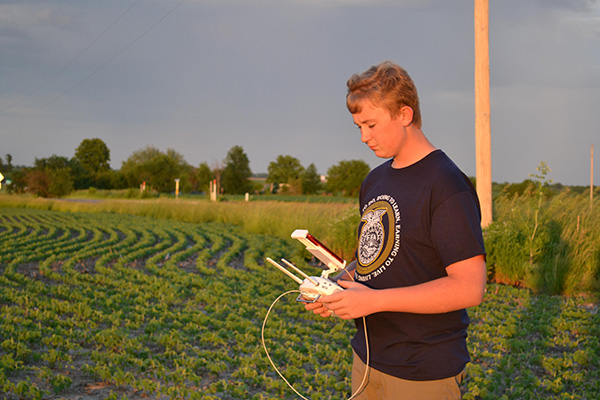 Memphis FFA member Brock Aylward has his sights set on the future, yet he won’t be far from home.

A national finalist in the grain production placement proficiency award area, Brock says working on the family’s farm alongside his father and grandfathers has had the most impact on his future plans to return home and continue a legacy in production agriculture.

“This has enabled me to learn and appreciate the love of the land and the impact I can have by being a good steward of the soil, embracing technology and the value of every bushel produced,” Brock explains.

Proficiency awards are based on a member’s Supervised Agricultural Experience (SAE).  They recognize individual skills and career-based competencies developed through multiple years of participation in Immersion type SAE projects.

Brock considers himself privileged to learn from two generations that have built a business from shear heard work and smart management decisions. “I’ve witnessed from my family that this job doesn’t mean managing from an office, but from putting in the physical labor and understanding all functions alongside all employees to be profitable,” he explains.

Through his placement experience on Aylward Farms, Brock operates tractors in addition to tillage equipment, planters and grain carts. Guidance systems assist with operating field cultivators, harrow, sprayer and planter — which he says is critical in helping the farm be as efficient as possible and reduce overlapping.

“The investment in planter monitors was a huge financial investment,” Brock says.

The monitors record the population, plant date, speed and hybrid/variety of the crop planted. Understanding how and what the monitors can do and then overlay that data with precipitation data from The Climate platform is then used to make additional informed management decisions, he says.

“With my employment on this row crop operation, I have witnessed the differences between owning land and cash renting ground,” Brock explains. “These differences include increased financial profitability and the ease of providing maintenance and improvements to the land.”

By investing his salary earnings and a previous purchased ground cash rental payment, Brock was able to purchase, with additional financial assistance, a 90-acre bottomland farm that he cash-rents to his family’s operation. Currently pursuing a precision agriculture certificate at the University of Missouri, he hopes to farm the land himself following college graduation.

While Brock’s role at Aylward Farms began in maintaining machinery and equipment, the young farmer now assists with machinery purchases as well.

“Working beside my dad engages me in all management decisions such as fuel purchases, seed, fertilizer and chemical pricing, commodity marketing, crop insurance and employee management,” Brock explains. “I have learned that fertilizer decisions are based off of yield results and soil testing.”

He’s also learned how to read soil tests and implement the best management practices to employ based off of the results.

Perhaps the greatest challenge Brock has been faced with in his role on the farm is understanding the different components that make up the farm. Juggling employees as well as machinery and other factors such as the weather that are out of ones’ control can prove difficult even for a well-seasoned farmer.

Still, through hands-on hard work and his involvement in soils and farm management FFA career development events have helped the aspiring farmer succeed.

“The knowledge, information and experiences that I received from being on these teams has given me immense comprehension into critical components of grain production,” Brock says. “The farm management team was the most challenging, but I think the most rewarding because the information I gained is very practical and critical to becoming a successful grain producer.”