Serve to Make a Difference 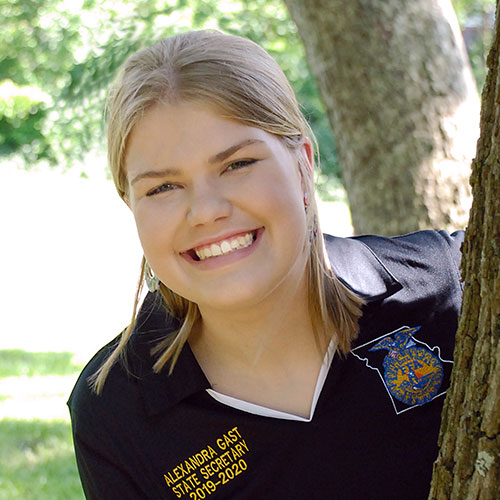 I spent more time being scared of the thing, rather than just doing the thing. I applied at the end of my freshman year to HYMAX Academy in agreement that if I didn’t get in, I would not enroll in an ag class the next year. I put half effort into my application, and when I didn’t make it in, I was MAD. I wasn’t mad at anyone other than myself though. I decided that day I got the letter of denial, I was in it to prove Missouri FFA wrong. After the first 6 months of that mentality, and attending State FFA Leadership Camp I realized that my home was the members in the blue jackets. I found my best friends in FFA, I found my sisters and brothers in FFA, I found my future roommate through FFA, and most of all I got the opportunity to serve FFA; through the Chapter, Area, and now State.

Missouri FFA, I’m here to tell you, it doesn’t matter how many awards you get, how many hands you shake, how many pins are hanging on the inside of your jacket, the level you serve at, or the number of times your name is in local newspaper; you can serve, and if you make even one positive impact, you made a difference in the world.