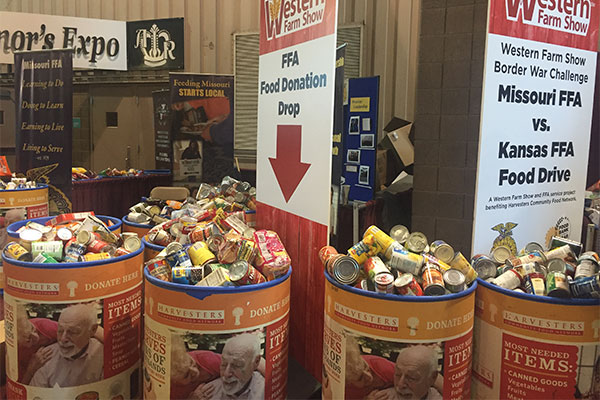 More than 3,500 students from the two states attended the show on FFA Day, Friday, Feb. 22, where they also had the opportunity to participate in educational seminars and learn about career opportunities in the ag industry.

About 70 chapters from Missouri participated, collecting 2,143 food items. The top chapters were Lone Jack (504), St. Joseph (233) and Gilman City (217).  Lone Jack once again had the highest total of all chapters from both states, a feat they have accomplished in seven of the last eight annual Western Farm Show food drives. The chapter will receive a $500 prize for their accomplishment.

Nearly 20 participating Kansas chapters brought 968 items to the show, with the highest totals from Louisburg (304) and Tonganoxie (280).  That ranked them second and third overall from both states, just behind Lone Jack.

The food was donated to the Harvesters – The Community Food Network, a Kansas City-based regional food bank that serves a 26-county area of northwestern Missouri and northeastern Kansas. In the eight years the Western Farm Show food drive has been conducted, more than nearly 34,000 pounds of food have been delivered to Harvester’s which provided more than 28,000 meals for those facing food insecurity.

“We’re so grateful to these FFA students and the Western Farm Show, and appreciative of their continuing commitment,” said Gene Hallinan, communications manager for Harvesters.

“FFA Day is always one of the highlights of the Western Farm Show,” said show manager Ken Dean. “All the participating students are to be commended for the great leadership and commitment they demonstrated to help in the fight against hunger.”

Produced by the Western Equipment Dealers Association, the annual Western Farm Show features over 500 exhibitors and more than 400,000 square feet of floor space showcasing one of the largest indoor displays of farm equipment and other agricultural products in the Midwest. Other attractions include the Low-Stress Livestock Handling Demonstration, the Health & Safety Roundup and Family Living Center.