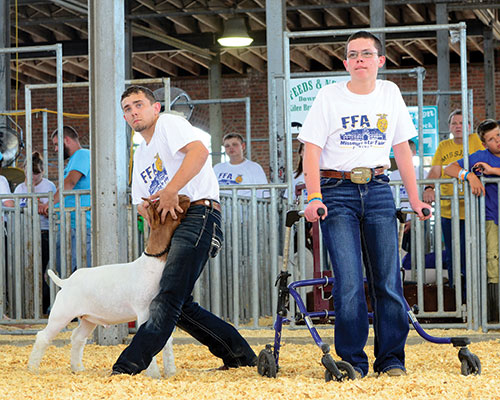 Riley Tade (right), a member of the Ashland FFA Chapter, earned honors as a national finalist in the goat production proficiency award area at the 2018 National FFA Convention. He said he learned the value of record keeping, hard work and setting goals through his Supervised Agricultural Experience project.

For many FFA members, their Supervised Agricultural Experience (SAE) can create a pathway to their future endeavors, as well as lead to nationally recognized success.

Eleven Missouri FFA members were selected as national proficiency finalists and competed at the National FFA Convention in October. How did those members establish and grow their SAE projects to reach top honors? We caught up with some of this year’s national finalists. Read on as they explain how they built and managed their award winning SAE projects.

From the Ashland FFA Chapter, Riley Tade was a national finalist in goat production. Tade’s SAE focuses on raising market wethers to sell to other 4-H and FFA members. His project began with seven does that were purchased to clean up brush and sell for meat.

Tade began exhibiting his goats, which led him to change bloodlines and focus on raising a higher-quality animal. His herd has grown to 15 Boer-cross does and 10 Kiko does. With the change in genetics and direction in his herd, he is able to sell his goats for a profit.

“Once people have seen the goats that I show and sell, it has made it easier to market them,” he said. Tade explained the importance of keeping records to track progress, setting goals and working hard to achieve those goals to build a successful SAE.

In addition, he said it is key to listen and learn from other people who are knowledgeable in their SAE area.

“I would work to find a mentor in the area of your SAE and see if they will help you,” Tade explained. “Adults are very willing to help a kid that they see is committed and willing to work hard.”

Tade said his FFA advisors and parents helped him reach his goals. He has learned to always strive to improve his SAE through monitoring buying trends and then meeting those with a desirable animal. He encourages other FFA members to have fun with their SAE and meet people that will help them achieve their goals.

“Find an SAE that involves something you have a passion for,” Tade explained. “When you love what you are doing, it does not seem like work, and you will put more effort into it.” 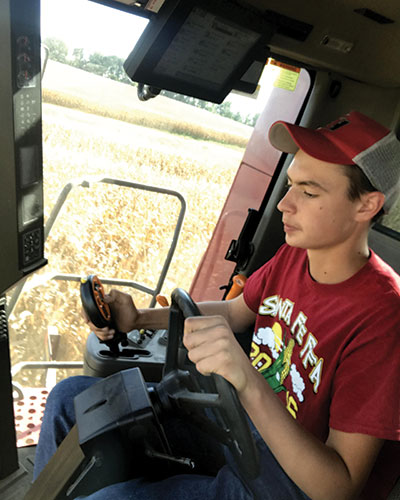 Santa Fe FFA member Jacob Dierking plans to continue growing his Supervised Agricultural Experience (SAE) project in the future as he enters production agriculture as his career. He was a 2018 national finalist in the grain production proficiency award area.

Jacob Dierking, a senior from the Santa Fe FFA Chapter, was a national proficiency finalist in grain production. His SAE began when he was given the opportunity to rent a field from his neighbor. He grew corn on the field and has since expanded his corn crop to 86 acres. The money he earned was used to purchase needed farm machinery including two tractors and other essential farm implements, to help produce the crop.

“I have a passion for farming, and that is what I enjoy spending my time doing,” Dierking said.

In addition, Dierking said his SAE taught him to work hard to achieve his goals, which he believes is the first step to building a successful SAE.

“Whether your goals are big or small, it helps to always have something to look “toward and build upon,” Dierking said.

Dierking said he dedicated a lot of time to his SAE and took advantage of opportunities that helped him expand his project. He encourages new FFA members to try different areas when beginning their SAE, finding a project they enjoy. Doing so will hopefully help them create an SAE that can transform into future plans, which has been the case for Dierking.

“I plan to expand my SAE into my life career of farming after I attend a two-year college,” he explained.

Grace Box, from the Neosho FFA Chapter, raises mums for her SAE project. 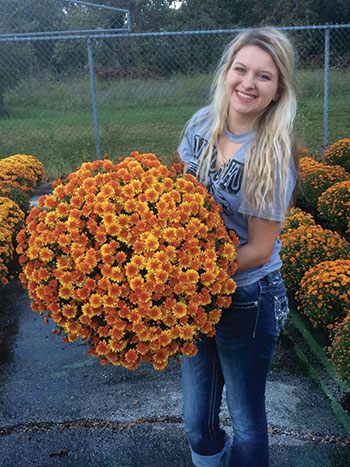 Neosho FFA member Grace Box chose to raise mums for her Supervised Agricultural Experience (SAE) because it was a unique project. With the help of social media, she’s expanded her business to include customers in neighboring states.

“I would not be where I am right now without my family, agriculture teachers, friends and my towns support,” BoxBox’s customers have helped her business blossom. A Facebook page helps with advertising needs. She has followers not only from the Neosho area, but also from Kansas, Arkansas and Oklahoma.

Box thought raising mums would be a unique SAE since no one else in her chapter had the project. She advises young FFA members to think outside the box and choose a project that helps set him or her apart. Members should then stay committed to their projects because it will be worth it in the end.

“My SAE has taught me how to take care of things and how to grow a successful business,” Box said. “It has helped me with my people skills and how to have salesmanship.”