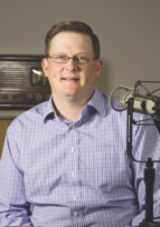 Andrew McCrea is a farmer and rancher, an award-winning radio and tv broadcaster and a nationally-recognized speaker. He is the host of the nationally-broadcast radio feature, The American Countryside, a program that has won five Oscars for rural and agricultural broadcasting. McCrea has interviewed hall of fame sports stars, Emmy and Grammy winners and even been body slammed by professional wrestlers! His broadcasting work has taken him to all 50 states and six continents to interview thousands of guests for his program. The American Countryside is unique in broadcasting because all of the interviews are done on location. His broadcasts are heard daily on nearly 100 radio stations and Sirius XM satellite radio. The television version of the show is a regular feature on U.S. Farm Report.

In addition to McCrea’s broadcasting duties, he continues to own and manage the farm and ranch where he was born and raised. McCrea Farms operates nearly 4,000 acres of crop and pastureland in northwest Missouri raising corn, soybeans and beef cattle. A past chairman of the Missouri Beef Industry Council and representative to the U.S. Meat Export Federation, McCrea remains active in a number of agricultural groups, both as a participant and as a frequent speaker.

McCrea’s past is rooted in Missouri FFA, beginning with the King City FFA Chapter in the late 1980’s. He served as the 1991-92 Missouri State FFA President and 1993-94 National FFA Secretary. He also worked as a trainer for National FFA from 1995-2005 and continues to assist the organization with national officer training and behind-the-scenes work at National FFA Convention. Since 1996, McCrea has conducted Missouri FFA State Officer Training, in addition to working with state officers in Illinois and Arizona. He is the Missouri State FFA Convention manager and is the director of both Area Officer Institute and Public Speaking Institute. McCrea has received the chapter, state and American Honorary FFA Degrees.

McCrea and wife Paula, along with children Luke and Allison, reside near Maysville, Missouri, where they are the fifth and sixth generations to operate the family farm. He’s quick to credit his VERY supportive wife, kids and father who handle the chores at home while he travels.

The Missouri FFA extends a special thank you to Andrew McCrea for his many years of service to agricultural education and the Missouri FFA.